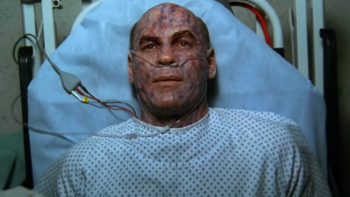 "Walter Skinner... your time... is almost up."
Written by John Shiban
Directed by Daniel Sackheim
"TELL ME WHAT YOU KNOW, SENATOR! This is about S.R. 819, isn't it? WHAT THE HELL DID THEY PUT IN SKINNER?"
— Fox Mulder