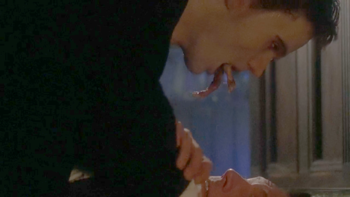 "It's called xenotransplantation. It's, uh, the grafting of another species into the human body."
Written by John Shiban & Frank Spotnitz
Directed by William Graham
"It is those Americans sympathetic to the communist cause— the so-called "fellow travelers"—who pose the greatest threat to our national security."
— TV announcer

A dying man's final word — "Mulder" — leads Fox Mulder to Arthur Dales (Darren McGavin), the father of the X-Files, who tells him about a case he worked with Mulder's father in the 1950s. Dales investigates Edward Skur (Garret Dillahunt), a State Department employee accused of Communism during the Red Scare, and discovers that Skur is in fact the victim of illegal medical experiments, involving an alien being that compels Skur to kill - and that officials in the US government conspire to cover them up.

"In the hope that by letting him live, the truth of the crimes that were committed against him and the others might someday... be exposed."