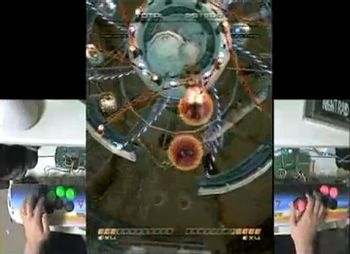 Those hands belong to the same person.
A Self-Imposed Challenge in two-player games in which you play both players at once.
Advertisement:

Actually makes things easier in Light Gun Games as you can simply dual-wield, but harder in games where each player controls an on-screen character, as well as games in which you use Stock Control Settings.

Since this Self-Imposed Challenge can be done on virtually any multiplayer game, examples will be limited to games that offer a doubles mode and thus recognize it, or games where this style of play gets enough attention.

Notable examples of Double Play in other games:

References to Double Play in other media :