Film / Sinbad of the Seven Seas 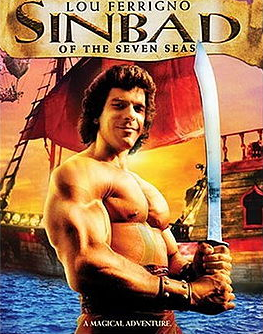 His name was Sinbad, conqueror of the seven oceans.
"It all happened many, many years ago, when our Earth was such a very little lonely grain of sand, lost in a myriad of stars. It was in those early days of mankind that a great hero was born. The bravest man ever born, and naturally, he was a prince. The greatest prince of the seas."
Advertisement:

Sinbad of the Seven Seas is a 1989 fantasy adventure film directed by Enzo G Castellari (until the studio went bankrupt and production ceased) and Luigi Cozzi (who was later brought in to finish it), and starring Lou Ferrigno (known primarily as the title character in The Incredible Hulk) as Sinbad the Sailor, on a quest to retrieve the four sacred gems of Basra and save Princess Alina (and the entire caliphate) from the clutches of the evil wizard Jaffar.

Sinbad of the Seven Seas provides examples of: