Video Game / Dawn of the Dragons 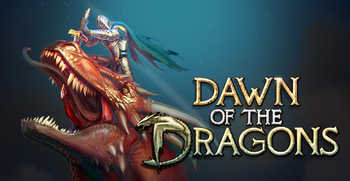 Dawn of the Dragons is a Flash-based Massively Multiplayer Online Role-Playing Game developed by 5th Planet Games in 2012. It is playable on Armor Games, Kongregate and Newgrounds, among other social platforms.
Advertisement:

The game takes place in the fictional region of West Kruna, and involves players stepping into the shoes of a farmhand who rises in power to become a skilled warrior and champion who must defend the region from a variety of evil forces that are trying to take over for their own means.

Dragons consists of several quest areas that players must journey through, during which they'll progress the overarching story and earn experience points, along with new weapons, armor, items and soldiers. These soldiers can be transferred to a player's "legion", a combat group that can be used to take part in raids against spawnable boss enemies and world raids.

The game features guilds (with their own respective boss raids), an Item Crafting system and Player Versus Player areas (that allow users to rank up and unlock new perks, weapons and armor). It also features a microtransaction economy, where players can buy powerful armor, weapons, troops and legions using "Planet Coins", the game's special currency (earned through level progression, achievements or real money).

There were also two tie-in games produced alongside it — Clash of the Dragons (a Collectible Card Game that takes place in the same era as Dawn) and Legacy of a Thousand Suns (a sequel story that takes place many centuries later, and features the Player Character as the captain of a starship and its crew).

Development of the game stopped in November 2019, with the announcement that the servers would be shutting down soon on January 2020. The last server shut down on February the 25th.