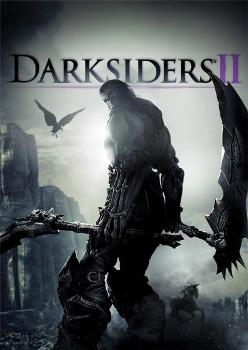 What starts with War...Ends with Death
Death is without a doubt the most badass of the Horsemen. He doesn't even have a weapon or a method of killing, all he does is show up and the shit hits the fan big time.
— Badass of the Week, describing Death

Darksiders II starts at nearly the same time as the onset of the first Darksiders. After War is convicted and sent back to Earth by the Charred Council, they inform the three other Horsemen of his fate. The eldest, Death, knowing that his brother War is the most honorable and incorruptible of the four, and would never have started the Apocalypse early, flies into a rage. Believing his brother is victim of a conspiracy, Death defies the Council's orders and sets out on a personal mission to find proof of his brother's innocence.

Death travels to The Abyss, a place between Earth, Heaven, and Hell, to call in favors from a powerful being that rules the realm. Undeterred by the knowledge that the truth of War's innocence will not sway the Council, Death instead chooses to erase the crime he is accused of by returning mankind from extinction, and finds himself transported to another realm with the goal of seeking the "Tree of Life." But all is not well, for even as the End War rages on, a sickly Corruption threatens to consume the realms and all of Creation itself, a Corruption rooted in the sins and regrets of the eldest Horsemen's past...

Unlike the first game, Darksiders II places heavy emphasis on RPG Elements. Death can equip himself with various types of armor and weapon sets, alongside a branching skill tree system to suit each player's style. A loot system has also been added, in which Death can acquire items from fallen enemies to craft new consumables or equipment. The currency system has also been changed: instead of souls, Death will make use of actual in-game currency.

Darksiders II is even larger and more of a Wide-Open Sandbox than its predecessor. The game takes Death across multiple dungeons and city hubs, the latter featuring NPCs who can give out side quests or allow Death to increase his skills.

With the dissolution of THQ and Vigil Games, the franchise had a rather uncertain future. Most of the staff originally involved is now working for Crytek, which placed a bid for the Darksiders IP in the auction of THQ's back catalogue in April, 2013. However, the IP was ultimately obtained by Nordic Games. Nordic has stated that they want to stay in touch with the original developers and continue the series someday, and later released the Deathinitive Edition for the PlayStation 4, Xbox One, Nintendo Switch, and PC through Steam and GOG.com, which features updated visuals and gameplay rebalances, alongside bundling all of the DLC into the package.

The game was made free for anyone on the Xbox 360 with an Xbox Live Gold Account during October 2014 as part of the "Games with Gold" program.