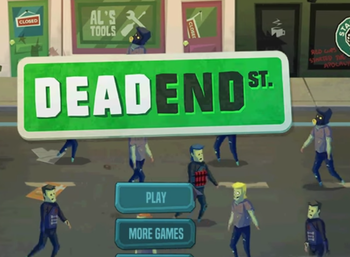 Dead End St. is a Tower Defense style-game made with Adobe Flash in 2016 and set during a Zombie Apocalypse. It can be played online here

, or downloaded for iOS.
Advertisement:

The goal is to guide a man named Brett and his pregnant wife Carley to a safe area by fighting through waves of Decayed and occasionally bosses. Some levels also have special objectives and side missions where players can earn upgrade points to mix things up a little.