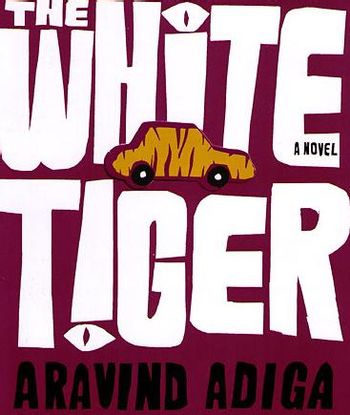 Why yes, the car is significant.
School inspector: You, young man, are an intelligent, honest, vivacious fellow in this crowd of thugs and idiots. In any jungle, what is the rarest of animals—the creature that comes along only once in a generation?
Balram: The white tiger.
School inspector: That's what you are, in this jungle.
Advertisement:

Chock full of satire and black humor, The White Tiger depicts the life of Balram Halwai—the eponymous White Tiger who only comes 'once in a generation—of how he starts as a lowly driver from the Darkness of India and manages to become a successful social entrepeneur with cunning, intelligence, and murder.

Told in the format of a series of letters to Wen Jiabao, the Premier of China. (Yes, It Makes Sense in Context.)

It is author Aravind Adiga's debut novel, and won the Man Booker Prize in 2008. It was adapted into a 2021 film directed by Ramin Bahrani and starring Adarsh Gourav as Balram, Rajkummar Rao as Ashok, and Priyanka Chopra as Pinky.

Not to be confused with White Tiger.