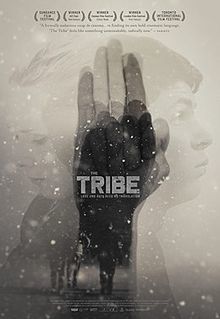 The Tribe (original title of Плем'я) is a Ukrainian film by writer/director Myroslav Slaboshpytskiy about organized crime in a school for the deaf. The film is presented without subtitles or voiceovers, and is almost entirely in Ukrainian sign language. Outside of that, it's an incredibly bleak film. The protagonist, Sergey, a new arrival to the school, gets pulled into the gang's ranks after one of the gang members suffers a fatal accident. He subsequently falls in love with one of the girls he is pimping and tragedy ensues as he attempts to prevent her from being taken from him.