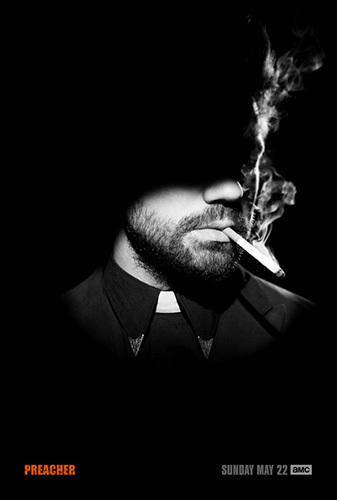 It was the time of the preacher
When the story began...

Preacher is an AMC television series based on Garth Ennis and Steve Dillon's comic book series of the same name. Sam Catlin (Breaking Bad) serves as showrunner, with Seth Rogen and Evan Goldberg (This Is the End) as writers. All three serve as executive producers.

Its story revolves around Jesse Custer (Dominic Cooper), a small town preacher with a Dark and Troubled Past whose life is turned around when he is cursed with "The Word of God", the power to compel people to do whatever he commands. Jesse soon finds himself drawn into a universe of religious madness, joined by his criminal ex-girlfriend Tulip (Ruth Negga) and Irish vampire Cassidy (Joe Gilgun).

Cassidy dispels some myths and explains how vampires work in the Preacherverse.

Cassidy dispels some myths and explains how vampires work in the Preacherverse.