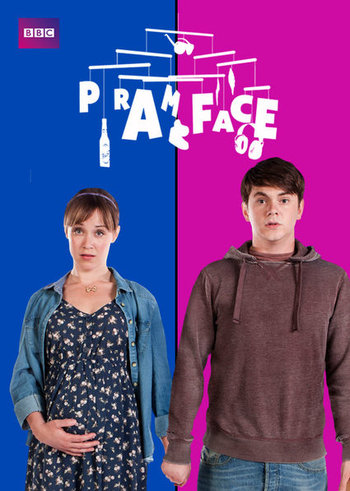 Pramface was a comedy show on BBC3 that follows the lives of Jamie and Laura, two teenagers from different walks of life who end up sleeping together at a party. Just weeks later the eighteen-year-old Laura realises she's pregnant. And then she realises that the father, Jamie, is only sixteen. The series shows Jamie and Laura attempting to cope with their new responsibilities, while dealing with embarrassing parents and their struggles to still be normal teenagers.

Jamie Prince - A sixteen-year-old trying to get laid after sitting his GCSEs. Sweet and somewhat naïve, Jamie is the Only Sane Man to both his friends and his family.

Laura Derbyshire - An eighteen-year-old girl just about to go to university, when she ends up pregnant from a one-night stand with Jamie at a party. She's mouthy and rebels against her parents due to their troubled relationship.

Mike Fenton - Jamie's best friend, a typical teenager who always seems to be getting into trouble due to his near obsession with getting laid.

Beth Mitchell - Jamie's other friend, a Granola Girl who has an unrequited crush on him. She's obsessed with human rights and really doesn't like Laura.

Danielle Reeves - Laura's best friend, a somewhat ditzy girl who is slowly drifting away from Laura due to her being pregnant.

Sandra Prince - Jamie's mother, a kind, motherly sort who isn't afraid of putting her son and husband in place when they need it. Takes a shine to Laura, and even gives her advice.

Keith Prince - Jamie's father, a man who can never catch a break due to everything that's happening in his life. Funny and good-natured, Keith really does do the best he can for his family.

Janet Derbyshire - Laura's uptight mother, who is quite volatile towards her husband. She isn't a good listener, and tends to be quite blunt and controlling.

Alan Derbyshire - Laura's father, who has had affairs in the past, and tends to be a little closer to Laura than she is with her mother. He's good-natured, if a little snobby.