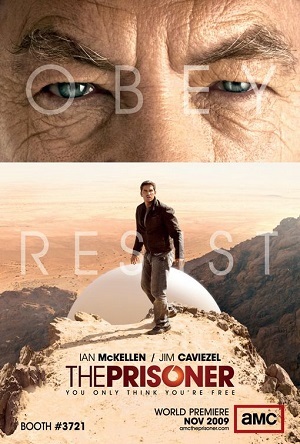 A remake of The Prisoner (1967) in the form of a six-hour miniseries that ran in November 2009. Jim Caviezel starred as 6 and Sir Ian McKellen as 2 (no "Number" in this version).

This was not a direct remake, as characterization, atmosphere, and ending were almost entirely different. Patrick McGoohan died before the series aired, but had been invited to make a cameo appearance, which he declined; played now by another actor, the cameo in episode 1 involved 6 coming across an old man dressed in Number 6's outfit from the original series.

The 2009 remake provides examples of: