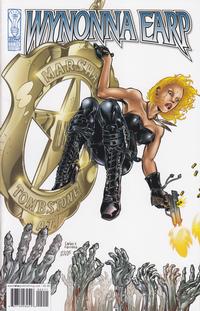 Wynonna Earp is the eponymous lead of several comic book limited series. The character is a creator-owned property and was created by Beau Smith. Currently published by IDW Publishing, the character has been published in the past by Image Comics.

Wynonna is a descendant of the famous lawman Wyatt Earp, and she's the top special agent for a special unit within the U.S. Marshals known as The Monster Squad. She battles such supernatural threats as Bobo Del Rey and his redneck, trailer-trash vampires that are pushing a new killer designer drug called "Hemo," and the Egyptian Mafia's mummy hitman, Raduk, Eater of the Dead, who's out to do in all the other crime bosses. In her subsequent adventures she finished some outstanding Earp family business while dealing with Hillbilly Gremlins, and Zombie Mailmen alongside her fellow Marshals.

Was adapted for television as Wynonna Earp.