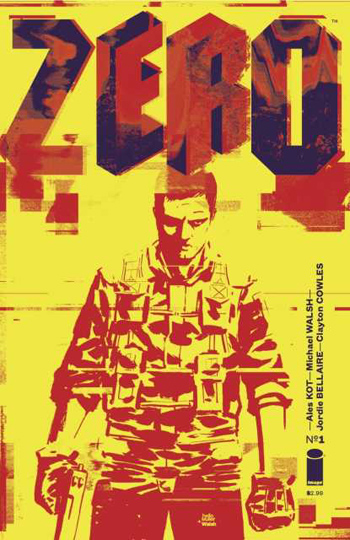 Edward Zero
"Existence is a perpetual state of war"
—The Agency
"Remember who you are."
—Ginsberg Nova
Advertisement:

In 2038, an old, scarred man sits on the cliffs of Dover drinking from a bottle. A boy has come to kill him, but before the happens, the man has a story to tell. Thus begins Zero, an Image Comics series by Ales Kot. Zero tells the life story of Edward Zero, a former super spy for the shadowy "Agency", as a series of vignettes (each issue being a self contained story illustrated by a different artist) stretching from 1994 to the future. At some point in the past Edward had a moral crisis and quit the Agency, but all is not quite as it seems.

What looks at a glance like a simple spy story quickly becomes more complex as more of Edward's complex life is revealed. Seemingly unimportant details from early issues later tie into the larger story in surprising and shocking ways. As such, be aware that this is a series with a lot of spoilers. While the series has no regular illustrator, the colors are always done by Jordie Bellaire which lends a strong sense of consistency.