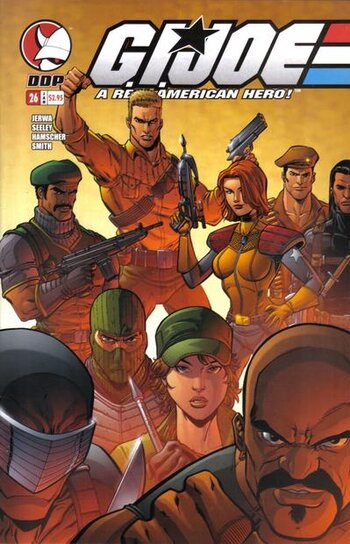 In 2001, Devil's Due Publishing (a spinoff of Image Comics) acquired the comic rights to G.I. Joe and launched a new series, set in the same continuity as the Marvel Comic, with the premise of G.I. Joe being reformed to continue battling Cobra after seven years of inactivity. They published an ongoing title - once again called G.I. Joe: A Real American Hero, but later renamed G.I. Joe: America's Elite - and several miniseries exploring the backstories of the characters. Devil's Due lost the comic rights to IDW Publishing in 2008, and their final issue was printed that July. The Devil's Due run has since been republished by IDW under the Disavowed banner, a reference to its non-canonical status following their decision to make a separate continuation of the original Marvel series.

Devil's Due Publishing also released two G.I. Joe comics that were set in their own continuity: G.I. Joe: Reloaded, an Ultimate Universe take on the franchise, and G.I. Joe vs. the Transformers, which consisted of four miniseries exploring a world where the characters of G.I. Joe and Transformers now had connected origins.