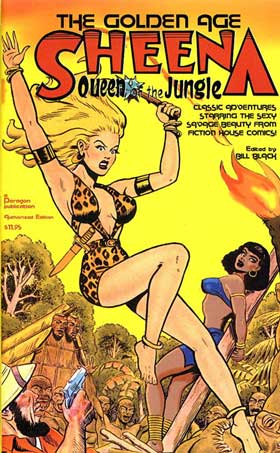 Sheena, Queen of the Jungle is a comic book character created by Will Eisner and S.M. "Jerry" Iger (exactly who came up with the original concept is in dispute as both men have claimed credit). Sheena first appeared in a British tabloid comic called Wags in 1937. Her American debut occurred a year later as a reprint published in the first issue of Fiction House's Jumbo Comics. Sheena soon became the featured character in Jumbo Comics and appeared in every one of the book's 167 issues, ending in April of 1957.

Sheena also appeared in her own self-titled book, running from the Spring of 1942 to the Winter of 1952-1953. She was the first female character to headline her own book, beating Wonder Woman into publication by three months.

Sheena was brought to Africa as a young child by her father, an explorer named Cardwell Rivington, who became friends with a tribal witch doctor named Koba. Koba became quite attached to Rivington, who taught him English. When Rivington planned to move on, Koba concocted a magic potion that would make his friend decide to stay. Unfortunately Koba botched the potion and Rivington died.

Koba took the orphaned Sheena under his wing and she grew up to become skilled in the ways of the jungle. Under the tutelage of the witch doctor, she became a strong, courageous and beautiful Jungle Princess. As an adult, Sheena met Bob Reynolds, a hunter/explorer who would become her Love Interest. Along with Bob and her pet ape Chim, Sheena spent the majority of her time battling evil white hunters, slave traders, misguided natives and the occasional rampaging wildlife. She also frequently found herself having to rescue the hapless Bob, who was always blundering into sticky situations.

Reprints of the original Sheena comics were issued by Blackthorne in the 1980s, and AC Comics in the 1990s. London Night Studios published a new Sheena mini-series in 1998, which was generally not well-regarded by fans of the classic comics, as this Sheena was a redhead mercenary named Sheila, with no connection to the previous Sheena mythology.

In 2007, Devil's Due Publishing acquired the rights to Sheena and rebooted the Queen of the Jungle with a series of one-shots and mini-series plotted by Die Hard writer Steven E. de Souza. The new stories moved Sheena from Africa to South America, where she protected the jungles of the Banana Republic of Val Verde from the encroachment of the local government and Caldwell Industries. While playing with the usual Jungle Princess tropes, the series did a fair job of modernizing the character, with Sheena now a Chosen One with a Secret Identity who fought loggers and land-developers instead of slavers and strange cults and her companion Bob now leading a nature preservation group rather than being a Great White Hunter.

Moonstone Books briefly acquired the rights to Sheena in 2014 and published a three-issue mini-series set in the same reality as de Souza's revamp. Sheena also made an appearance in their Phases of the Moon mini-series, teamed with fellow Golden Age Of Comics heroes Captain Action and Domino Lady.

The comic rights to Sheena currently reside with Dynamite Comics, who have held them since 2016. Sheena first appeared in a six-part crossover with Tarzan called Lords Of The Jungle. and a new limited series that was loosely based on the 2007 de Souza revamp.

Tropes introduced in the classic Sheena comics include:

Tropes introduced in the London Night Sheena comics include:

Tropes introduced in the Devil's Due/Moonstone & Dynamite Sheena comics include: