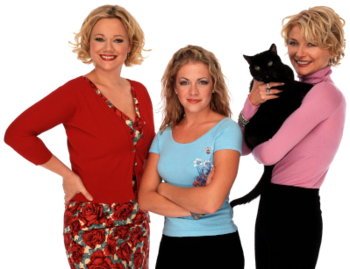 The one in the middle is shorter. Must be a teenager.
Advertisement:

Imagine that you are making a show which features teenagers alongside adults. You want to avoid Dawson Casting, so you try to hire actual teens for these roles. But wait, these kids are taller than half the adult cast! Some of the boys are sporting beards already, and the girls might have had their "summer growth spurt." Half the audience won't even believe that they are real teens. So how do you make them look definitely younger than those middle-aged adults? Let's hire the shortest ones possible!

Part of this can be the visual effect of a show shot from a child's or teen's perspective. The adults tower over our protagonists in terms of authority, and the best way to demonstrate that is make them physically much taller (or the child physically much shorter) than they actually are or conceivably would be. This is especially true in animated shows, which can oftentimes have the child reach no higher than the parents' waist despite almost nearing adolescence. Again, it's a visual clue as to the power dynamic.

In Real Life, most people are at or near their adult height by 12-16, with girls tending towards the earlier end of that range and boys tending towards the later end. For reference, the average adult height in the U.S. is around 5'9" for men and 5'4" for women. This means a teenager who's on the tall side can tower over their adult costars and ruin the visual effect.

Contrast: Dawson Casting. Or compare, as short, baby-faced actors can make a career of playing teenagers throughout their 20's (even if they'd rather not). A Sister Trope to Tiny Schoolboy, in which the boy is short for reasons he can't control and it's rather noticeable among others his age.

Pint-Sized Kid is the prepubescent version, and Artistic Age is the opposite of this trope.