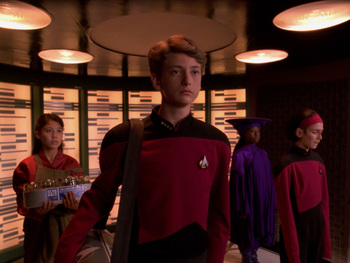 If Picard is uncomfortable being around children, what must becoming a child feel like for him?
Advertisement:

Captain Picard, Ensign Ro, Guinan and Keiko O'Brien are on their way back from a botany and archaeology conference when their shuttlecraft passes through a Negative Space Wedgie. When O'Brien beams them aboard just before their shuttlecraft explodes, they arrive as children.

Crusher analyses the four kids and finds that their faculties are identical to how they were as adults, and their bodies are perfectly normal 12-year-olds. Picard tries to resume his command while the doctor continues her research, but Crusher talks him out of it. The rest of the kids have widely different reactions. Keiko's new body puts a serious strain on her marriage. Ro is annoyed by the prospect of living through childhood again because the first time was so traumatic for her. Only Guinan seems pleased to get a chance to spend some time as a kid again.

Picard struggles to figure out what he'll do with himself if he can't return to his normal age. Guinan persuades Ro to cut loose a little and play some childish games. Keiko and Miles suffer an uncomfortable night at home, during which their child doesn't recognize her mother. Meanwhile, Crusher finds that a molecular inversion field stripped out the four crew members' RVN sequences during transport. If RVN could be reintroduced, they could theoretically return to normal.

But as the investigation continues, the Enterprise is suddenly ambushed by two Klingon Birds of Prey. The ship fights back, but its shields get depleted, and a Ferengi boarding party assumes control of the ship under the leadership of Daimon Lunn. Lunn claims to be a rogue from the Ferengi alliance and simply wants to sell the Enterprise to the Romulans. He has the crew beamed down to the surface of a nearby planet to use as slave labor for an additional mining enterprise. Riker has locked out control of the ship, but Lunn tells him that the crew's lives are in danger should he not return the controls to his men.

Meanwhile, the children on the ship has all been herded into the ship's classroom, including our four adults kids. They try to get access to the computer, but the children's terminal in the classroom is insufficient. Picard masquerades as Riker's bratty son and delivers a coded message to him to give computer access to the classroom. Riker agrees to hand over control of the computer to the Ferengi, and Dunn stipulates that he must also instruct one of his men on its use. At a computer terminal, Riker feeds the Ferengi a stream of beguiling Techno Babble while he surreptitiously grants Picard's request.

In the classroom, Picard, Ro, Guinan and Keiko gain access to the computer and set about taking down the various Ferengi guards around the ship. They enlist the help of Alexander to start planting communicators on the Ferengi and teleporting them to a transporter pad that has been locked off by a force field. Using their small size and seeming innocence as advantages, they manage to take down all the Ferengi. Picard confronts Dunn in his own office and holds him at phaser-point.

With the Ferengi brought to justice and the ship restored, Crusher prepares to return the four de-aged crewmen to their original ages by teleporting the back through the molecular inversion field. Picard goes first and emerges as his old self, though he does pass a regretful hand over his bald head. A restored Guinan goes to find Ro, who is still a child and drawing pictures with crayons. Guinan suggests that Ro stay a child for a little longer now that she is finally enjoying her childhood. They begin coloring pictures together.

Just Explain It To Me

In "Rascals" from "Star Trek: The Next Generation," Commander Riker overloads the Ferengi Morta with ridiculous (and utterly fake) technobabble to distract him as he enables to command access to another station to save the Enterprise-D.

Just Explain It To Me

In "Rascals" from "Star Trek: The Next Generation," Commander Riker overloads the Ferengi Morta with ridiculous (and utterly fake) technobabble to distract him as he enables to command access to another station to save the Enterprise-D.