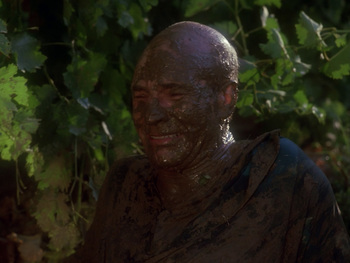 With the Enterprise drydocked at Earth Station McKinley following the recent Borg incursion, the crew takes the opportunity for some downtime. Worf is not happy that his adoptive human parents are on the list of visitors coming aboard. Picard takes the opportunity to go home to France, much to Troi's surprise due to effort it took to pry him out of the command chair to take vacation in the past. Additionally Troi is concerned Picard hasn't fully recovered from the trauma of being assimilated by the Borg. Picard assures Troi that he's better now, and he's simply availing himself of the opportunity to go home.

As Worf waits in the transporter room for his parents, Chief O'Brien tries to sympathize with him regarding embarrassing parents. Worf's parents, Sergey and Helena Rozhenko, beam aboard, and Sergey (a retired Starfleet enlisted man) immediately wants to take a tour of the ship before being reminded by Helena that they're on board to see Worf. Meanwhile, Picard has decided to walk to his family home when he's accosted by a young boy, who we quickly learn is Picard's nephew René. René tells Jean-Luc that his first impression of his uncle doesn't quite match up with what his father has said about him. The two arrive at the house and are greeted by Jean-Luc's sister-in-law, Marie. After exchanging pleasantries, Jean-Luc goes out to the vineyard, where he finds his brother Robert tending a sick vine. It's fairly clear from their small talk that the brothers don't get along, and though Jean-Luc is hoping to mend that fence, Robert is still clearly resentful, so Jean-Luc leaves him to tend the vine.

Back on the ship, Dr. Crusher receives a case containing some of her late husband Jack's personal belongings, including a holographic message he'd recorded for Wesley when he was a baby, intended as the first of a series of recordings to be viewed when Wesley grew up. She's hesitant to give it to Wesley, but Troi suggests the recording might provide answers to some questions Wesley still has about his father. In engineering, La Forge is giving the Rozhenkos the nickel tour, and they relate a story about how a seven-year-old Worf beat up five teenage boys. When Sergey asks Geordi about the warp core, Helena asks Worf to show her the arboretum so the boys can talk shop. When they leave, however, Sergey asks Geordi about Worf, showing parental concern.

Marie tells Jean-Luc about recent developments—that his old friend Louis is supervising a project to create a new subcontinent on Earth (an idea that Jean-Luc finds intriguing, but Robert scoffs at), and that the mayor wants to throw a parade (which Jean-Luc refuses, as he's home solely to rest and spend time with his family). When Jean-Luc can't quite identify the vintage of the wine they're drinking, Robert chides him and suggests that the synthehol served on the Enterprise has ruined his palate, though Jean-Luc counters that it's raised his appreciation for the real thing. The conversation turns into a clash of ideologies: Robert prefers the traditional ways of life, as their father did, and he sees Jean-Luc's Starfleet career as an affront to everything he stands for. Moreover, Robert is concerned about his brother's influence on his son, who is aspiring to enter the Academy himself.

The next day, Jean-Luc is meeting with Louis, telling him that although he appreciates his family's winemaking heritage, he never felt personally bound by it. As they talk about the Atlantis Project, Louis is impressed with how much Jean-Luc has kept up on it, and Jean-Luc even offers insights from a previous mission that could prove helpful. Louis is eager to hear Jean-Luc's thoughts and offers to send some project details over for him to review.

In Ten Forward, Worf is still uneasy with his parents, and they recognize that they do come off as a little eager. When Worf is called away, Guinan takes the opportunity to introduce herself to them, and asks them why they never introduced Worf to prune juice. They're surprised, since Worf had always insisted on Klingon food growing up. She goes on to praise them for the job they've done in raising Worf, despite the difficulties and the lack of Klingons for him to relate to growing up, and she points out that when he's looking out the window toward home, he's not looking to the Klingon Empire, but to Earth.

Jean-Luc tells Marie that he's intrigued by Louis's project, and Marie thinks that if he did choose to stay on Earth, it might give the brothers a chance to grow to like each other. Louis shows up and says that the project team is excited at the idea of Jean-Luc joining them, although Jean-Luc never made any commitment; he does take Louis up on the offer to listen to their proposal.

Back in Worf's quarters, his parents reveal that they had to see him after hearing about his discommendation. Worf insists he must bear his dishonor alone, but they insist that, no matter what, he will always be their son, and as human an attitude though it may be, they will always be there for him. Worf accepts this.

Jean-Luc has been drinking and considering Louis's proposal when Robert shows up. Robert reminds him that the effects of real alcohol can't be shrugged off like synthehol, and amuses himself at the idea of his brother being out of control. Jean-Luc evades Robert's line of questioning about the Borg incident, and storms out of the house, but Robert follows to press the issue. The resentment comes out in full force—Robert hated that Jean-Luc was the favored son, the one who won all the awards, the one who could break their father's rules and get away with it, while as the older brother he had to be the responsible one; Jean-Luc, meanwhile, always perceived his brother as a bully. When Robert suggests that Jean-Luc came home so that his brother could take care of him, a fistfight erupts that leaves the two covered in mud, and laughing at the end. Robert suggests that Jean-Luc has been too hard on himself, and it's at that point that the captain breaks down, revealing how the Borg had stripped him of his humanity and used him against Starfleet, and how he couldn't stop them. Robert tells him that he'll have to live with that for a long time, but it's up to him whether or not it will be under the sea with Louis, or back aboard the Enterprise. As the two make their way back to the house, Robert reminds Jean-Luc that he still doesn't like him, but the two chuckle their way back. When Marie returns to the house, she's astonished to find them, still covered in mud, and getting along for once. Jean-Luc decides his place is on the Enterprise, and that if he ever doubts that again, he knows where to come.

Wesley plays the message from his father. Jack explains that he made the recording because the man he was at that moment, when Wes was still an infant, would be a much different man by the time Wes would be viewing it, and he apologizes for the mistakes he expects to make. He hopes Wes isn't upset about how much he was gone because of his Starfleet career, and hopes the kid will understand, and possibly consider trying on the uniform himself some day (as Wes views the recording wearing his uniform). Jack then suggests that Wes might instead end up a doctor like his mother. As the recording ends, Wes bids his father goodbye.

Captain Picard, back in uniform, prepares to leave his family home. René tells him he's going to be leaving for his own starship some day, but Jean-Luc tells him he might change his mind when he gets older. Robert gives Jean-Luc a bottle of the '47 wine, and asks him not to drink it all at once, and if possible, not to drink it alone. The brothers finally share a hug.

As the Rozhenkos prepare to depart, Helena asks Worf if there's anything he wants from home; he asks for some of her homemade Rokeg blood pie. They meet the captain as he returns, and Picard asks if they've had a tour of the ship. Sergey expresses his disappointment that they weren't able to see all of it due to the repairs, but Helena and Worf drag Sergey into the transporter room.

Back home, René watches the stars and dreams of starships. Robert agrees to let him dream.