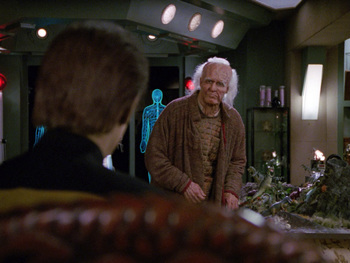 The Enterprise is on a medical mission to transport a sick child to a starbase medical lab after a prank from the boy's brother went awry. While escorting the older boy to pay his sick brother a visit, Data begins acting oddly. Without warning, he turns off the life-support systems on the bridge, forcing the rest of the crew to evacuate. He then commandeers the ship by imitating Picard's voice and setting security codes so that only he can control all the crucial systems, then sets a new course to an unknown planet.

Data beams down to the planet and is reactivated to his normal self by an old scientist. Data quickly recognizes the man as Dr. Noonien Soong, his creator, who was thought to be dead. Data showers his creator with questions, such as why he created him in the first place. Soong states that, just as humans wish to have a sense of continuity with the past, they also wish to have a sense of immortality into the future through procreation. However, their conversation is interrupted by the unexpected arrival of Lore, who also answered Soong's summons.

On the Enterprise, the crew is scrambling to regain control of the ship. They have only about 24 hours before the sick boy will succumb to his infection. But Data's modifications to the ship leave them without the ability to use the warp drive or transporters. Geordi concocts a plan to jury-rig the transporters, and he sets to work with O'Brien.

The family reunion between the androids and their creator goes fairly poorly. Soong reveals that most of what Lore told Data about each other was a lie, including the claim that Data is a less-perfect copy of Lore. Soong then admits that he is dying and had summoned Data to provide him with a specially designed emotion chip. Lore thinly veils his intense jealousy through a congratulatory veneer. After a night's sleep, Soong installs the emotion chip, but it turns out that he does so in Lore, who has incapacitated Data and taken his place. The chip immediately begins to malfunction, and Lore hurls Soong into some furniture before leaving.

Geordi, Worf and Riker beam down to the planet using their newly modified transporters and discover Soong critically injured and Data deactivated. They reactivate Data, who rushes to Soong's side. Soong refuses to seek medical attention and wishes to remain behind to die. Data assures his creator that he will live on through Data. When Data admits that he cannot mourn for Soong, the scientist tells him that he will, in his own way.

Data returns to the ship, which makes it to the starbase just in time to save the boy. When Data sees that the brothers have reconciled, Dr. Crusher states that brothers always forgive each other. Data contemplates her words uncertainly.