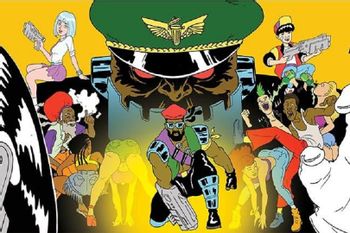 Major Lazer is an American animated television series based on the electronic music project of the same name, created by DJ and record producer Diplo, Ferry Gouw and Kevin Kusatsu. Quoth the AV Club, “Though it riffs on one of the crudest periods in TV animation, Major Lazer remixes the chunky outlines, washed-out colors, and fantastical content of ’80s Saturday-morning fare into something that’s psychedelic on purpose.” Basically, each episode is an animated, ten-minute music video, and it is glorious.

The show is broadcast by FXX as part of their Animation Domination block. A sneak peek first episode aired Oct. 27, 2014, while the series proper premiered on April 16, 2015.