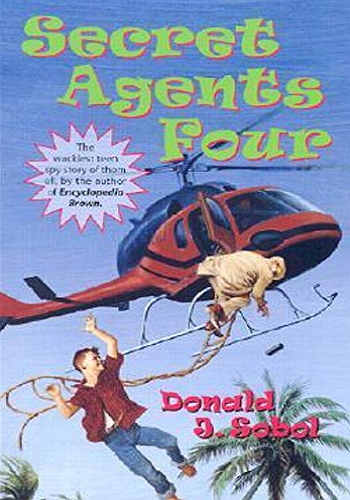 Secret Agents Four is a 1967 book written by Donald J. Sobol, the author behind Encyclopedia Brown and Two-Minute Mysteries. The book concerned four high schoolers who, over summer break, become mixed up in espionage in their hometown.
Advertisement:

The protagonist is sixteen year old Ken Mullins, son of the assistant chief of the Miami bureau of Mongoose, a government agency. He and his friends Orv ("Dade City's top boy inventor"), Bo (a seven foot tall athlete), and Horseshoes (whose real name is Jerry...but they haven't called him that since he won the horseshoe-pitching contest at the State Fair in eighth grade) pursue a man they believe to be a car spy - but who, in actuality, is a low-level Cobra agent.