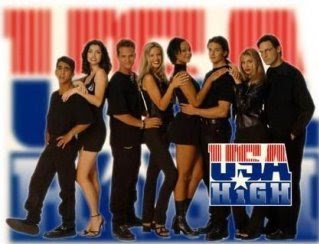 Say, who else remembers that Peter Engel sitcom from the 90s? The one with the group of six high school students who get up to all sorts of hijinx. Their favourite hangout is a local diner. Characters include the African-American rich girl with a heart of gold, the Hollywood Dateless comic relief and of course the blond California dude - who has some on again-off again romantic tension with an attractive brunette.

Saved by the Bell? Who said anything about that?

USA High was a sitcom spawned by Engel in the late 1990s, clearly inspired by the success of SBTB. It revolves around a boarding school in a very Americanised district of Paris, France (to the degree that the characters seem to pay for everything with dollars). The principal cast include:

The show was successful enough on the USA Network to last two seasons (and outlasted the network's cartoons, to boot) - and enjoyed a slight surge in popularity when rerun on foreign feeds of Nickelodeon in the early 00s.