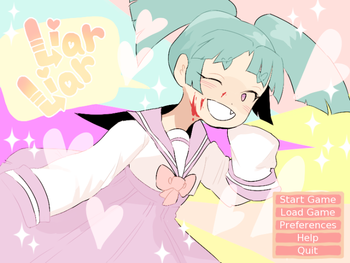 . Originally an experiment on how to write VNs and plot flags, the game's popularity exploded about a day after it was posted, leading to a slew of fanart and a sequel, Pants on Fire.
Advertisement:

Liar Liar follows the story of Yukari, an adorable middle schooler with green hair. She asks the player to assist in killing her boyfriend. Along the way, she may find love, or she might die horrifically.

The first game's description and download can be found here

; the sequel is here

. Tokimekiwaku ended up making a Gaiden Game featuring Pants On Fire's Wakabayashi based off an old April Fools' Day joke, which can be downloaded here

. A remake of Pants on Fire is also in the works, with the demo

Please do not confuse it with the Jim Carrey movie.