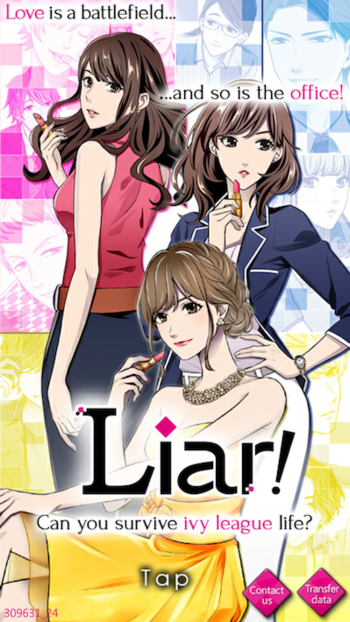 Liar! Uncover the Truth is a Visual Novel Freenium Romance Game from Voltage, Inc. for iOS and Android devices. It was originally released in Japanese in 2015, and was translated to English the following year.

You play as a woman who recently just dumped her boyfriend for cheating on her. With her mother planning to introduce her to a marriage candidate from her hometown in a month, our hero heads over to a matchmaking party. There, she meets ten men who fall for her immediately. She also meets a fortuneteller who gives an interesting message: one of the men will be her future husband. The rest will all have huge secrets.

Since the MC's criteria for Mr. Right doesn't include liars, she must comb through each of the guys and eliminate them one by one until she's left with the man of her dreams.

In May 2017 the game received a spin-off titled Office Deception in which you play a woman that has been transferred to a different team at her workplace. She is told that out of her ten new co-workers one of them will be a reliable teammate, but the other nine will be no good idiots. In order for the team's project to be a success, she needs to weed out the liars until she finds the perfect business partner.

A second spin-off, Scheming Socialites, was released in July 2018. In this story you play a wealthy college student who is the heiress of the wedding planning company the Uncover the Truth heroine works for, as she tries to find a suitable partner before her parents force her into an arranged marriage after graduation.

The game's third spin-off, Dark Lies (unofficial title), features a darker story starring a woman who is the daughter of a yakuza leader, who wants nothing to do with the underworld and live a normal life. She works as a nurse at a hospital where her mother, who fell into a coma when she was a child, is hospitalized in. This spin-off is yet to be released in English.

The game's fourth spin-off, App Matchmaking (unofficial title), features a woman who needs to be proposed to within 100 days, before she turns 30. She signs up on a dating app with the help of her two girlfriends, who guide her in looking out for "no-good men" on the app. This story features 17 men in total. This spin-off is yet to be released in English.

The Japanese version also offers the ‘Mini Liar’ series, which function similarly to the main stories, but are shorter, having only 6 candidates instead of 10 or more, and do not offer multiple endings at the end of every chapter for each character. There are currently 3 Mini Liar stories available: Luxury Cruise, Lying Women, and High-Rise Mansion.

‘Luxury Cruise’ features a woman who was supposed to go on a cruise with her boyfriend, but was dumped right before they boarded the ship, despite having promised her mother that she would introduce her boyfriend to her parents when the ship arrived in Singapore. She meets 6 men on the ship, including the ship’s owner and other famous people. Her goal is to see through the lies of 5 of them and find her destined person amongst them.

‘Lying Women’ features a male protagonist for the very first time, and is about a man who meets 6 women at the same matchmaking party the heroine of ‘Uncover the Truth’ attended, and has to find his ideal woman amongst them. The hero is a researcher and section chief of a large company that produces dairy products.

These games include examples of the following tropes: