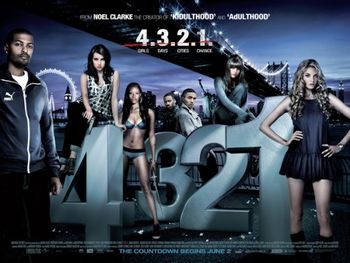 The guy is not the star. At all.

4.3.2.1 is a British comic-dramatic crime thriller co-directed by Noel Clarke (who also wrote the script and played one of the supporting characters) and Mark Davis. It stars Emma Roberts, Tamsin Egerton, Ophelia Lovibond and Shanika Warren-Marland.

The film follows four young women over three days in London and New York as they try to deal with personal problems and get slightly mixed up in an international diamond heist. Think of it as a British version of Go and you wouldn't be a million miles off.