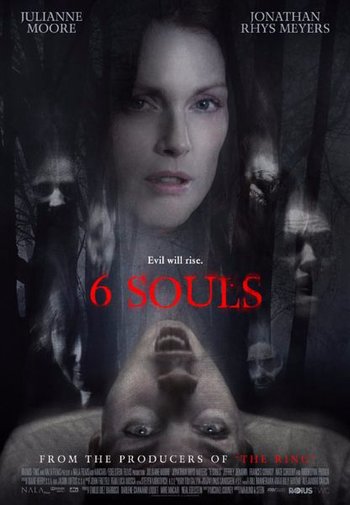 6 Souls (released as Shelter outside the USA) is a 2010 American Horror Film starring Julianne Moore, Jonathan Rhys Meyers, Jeffrey DeMunn, and Frances Conroy. Cara Harding (Moore) is a widowed single mother with a flourishing career as a forensic psychiatrist. She has made a name for herself by debunking alleged cases of multiple personality disorder. Cara's father (DeMunn), however, believes that she has become closed-minded. Searching for a case Cara cannot refute, he brings her Adam (Rhys-Meyers;) a young man who assumes not only the persona, but the physical disabilities of a paralyzed man. Cara initially meets the challenge enthusiastically, but the case takes an eerie turn as more of Adam's personalities emerge. Meanwhile, a mysterious, flu-like illness slowly begins to infect Cara's friends and loved ones...