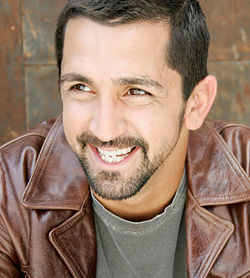 "I am from The Bronx. When you hear the "cops" and none of your guys are down, you run."

"If I could have man-love for another man's body, it would be for Jimmy Madio."
- Damian Lewis

James "Jimmy" Madio (born November 22nd 1975 in The Bronx, New York) is an American actor from The Bronx, New York. He got his start as a child actor, playing a Lost Boy called Don't Ask in Steven Spielberg's Hook and Dustin Hoffman's son in the film Hero. He continued acting into adulthood with roles in The Basketball Diaries, Jersey Boys, Kick-Ass and Love Lies Bleeding, among other independent films. He's perhaps best known for playing Bobby "Lazz" Lazzarini on the sitcom USA High or as Frank Perconte in Band of Brothers. He's also done voiceover work for he Call of Duty video games, as well as writing, producing and directing numerous projects.

In 2011 when interviews were done to commemorate the ten year anniversary of Band of Brothers, he enjoyed a surge in notoriety - as his fellow cast members seemed to have endless stories about him on set, making him something of a Memetic Badass. It should come as no surprise that he's still good friends with most of them to this day.