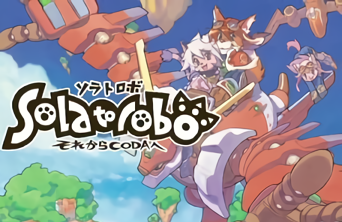 Solatorobo: Red the Hunter (「ソラトロボ -それからCODAへ-」, "Soratorobo -Sore Kara Kōda e-", lit. "Solatorobo: And Then, to CODA" in Japan)note "Solatorobo" is Japanese for "Sky and Robot" is a 3D Action RPG and platform game for Nintendo DS published by Namco Bandai in Japan the 28th of October, 2010 and developed by CyberConnect2. It is a Spiritual Sequel to the 3D anime-style Action-Adventure and platform game Tail Concerto, the first game produced by the developers. Solatorobo is considered to be the third of the Little Tail Bronx series, and was released in Europe and Australia in July 2011, with a US release confirmed at E3 2011, although the release date (September 27th) wasn't given until a few days later.

The game is set in the same world as Tail Concerto, floating islands above a sea of plasma inhabited by anthropomorphic cats and dogs, but is now set in the Shepherd Republic instead of Prairie.

In the game, you play as Red Savarin and gameplay focuses on controlling his Mini-Mecha, DAHAK-AZI03, or simply DAHAK. The combat usually involves picking enemies up and throwing them, catching projectiles and throwing them back, or picking enemies up and throwing them at other enemies. The DAHAK is also customizable, with different armor types made for different combat situations (speed, defense, power, etc.). The game also boasts a large selection of side-quests which help flesh out the world the player is in and various mini-games, including airship racing and giant hermit crab fishing. Notable for being absolutely gorgeous for a DS game and having 100 different advertisements made for it aired on the 21st of October in a successful attempt to break a world record. Also, Yoshitake Taniguchi of Super Robot Wars fame was in charge of the Mini-Mecha designs.

Now has a character sheet in progress!

CyberConnect2's president, Hiroshi Matsuyama, had also confirmed that they were working on a sequel,

however so far nothing seems to have stem out yet.

In January 2018, Fuga: Melodies of Steel, a new title set in the same world as Solatorobo and Tail Concerto, was announced by CyberConnect2

For another game that also involves mechas and grabbing+throwing gameplay, check out Mischief Makers.

Bonjour! Here are the tropes you can view at the moment!