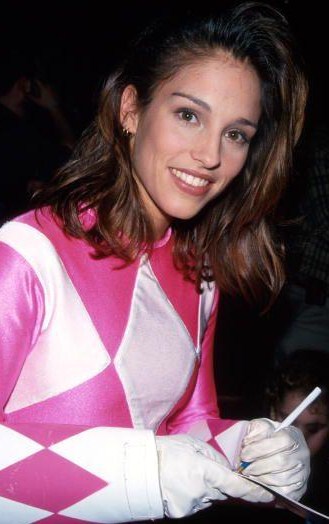 Famous for being the first Pink Power Ranger. Amy Jo Johnson (born October 6, 1970 in Hyannis, Massachusetts) has since gained a reputation as one of several Rangers who made it big after their stint on the series.

Prior to being an actress, Amy Jo participated in gymnastics, and after years of training and competition, she reached the highest-ranking class, Class One. After a while, she was severely injured, forcing her to abandon her dreams of going to the Olympics.

Later, she starred in the show that would make her famous, Mighty Morphin' Power Rangers. Amy Jo was regarded as a Teen Idol. After three years, she decided to quit in order to further her career, and she was written out. She would star in Susie Q and Saved by the Bell.

In 1998, she would star in Felicity. In it, she portrayed Julie, a singer/guitarist. She would stay on the show for two and a half years, eventually quitting, so she could take the time to grieve for her mother's death.

Amy Jo would gain roles in independent films until in 2008 she landed the role of Jules Callaghan in Flashpoint. At that time, she was also expecting a baby, and in December of that year, she gave birth to a girl, Francesca Christine. Since then, Amy Jo is known for being one of the few rare Ranger actors who still has a career in acting and singing/songwriting.