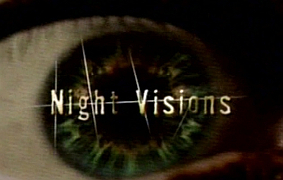 Night Visions is a The Twilight Zone-esque horror anthology series that ran for 13 episodes in 2001. Each episode features two half-hour stories, generally with a Twist Ending. Henry Rollins introduces each story and provides some kind of Aesop at the end.