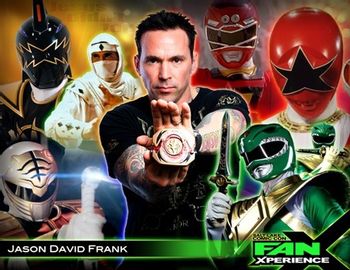 Jason David Frank (born September 4, 1973) is an American actor/martial artist, whose claim to fame is portraying Tommy Oliver, the original Green Ranger of the famed Mighty Morphin' Power Rangers as well as several other colors in numerous Ranger series.
Advertisement:

In addition to being an actor, Jason owns his own karate schools and started a career in Mixed Martial Arts.

He also held the Guinness World Record for breaking the most pine boards in a freefall.

Notable works he has appeared in: