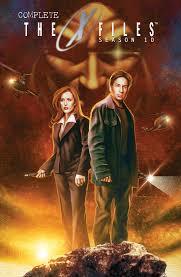 The X-Files Season 10 is IDW Publishing's 2013 comic book revival of the television series The X-Files, continuing the canonical adventures of Fox Mulder and Dana Scully after the events of the second movie, The X-Files: I Want to Believe. Produced by TV series creator Chris Carter, the comic gives the storyline a major contemporary overhaul, now telling the story of the government/alien conspiracy in the context of uncertain, paranoid, Wikileaks-driven New Tens as opposed to The '90s. Also promised are sequel stories featuring prominent "Monsters-of-the-Week" from the show.

the canon of the comics.

"Cold Cases" is an Audio Adaptation of the comics, and was released on Audible on July 18, 2017, featuring the voice talents of David Duchovny, Gillian Anderson, Mitch Pileggi, and more.

The X-Files Season 10 provides examples of the following tropes: