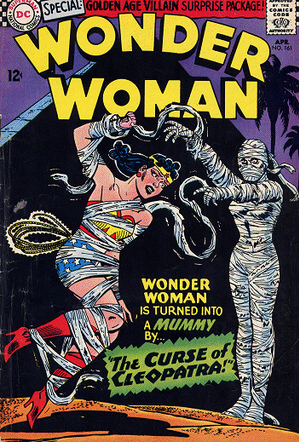 When a mummy has reason to restrain the living, it will frequently do so by wrapping them in bandages similar to its own. The victim's head (or at least their face) is usually left uncovered, as the living still needs to breathe, though in some cases, their face being covered in bandages doesn't seem to impede their breathing at all; sometimes the victim's mouth can be covered with bandages to gag them. May also be done by an Egyptian-themed criminal, or a regular criminal with the ability to wrap his opponents. Similarly to All Webbed Up, this counts as fetish fuel to some people. Also see Bound and Gagged.

Harnessing the power of Anubis, the Pharaoh has the power to turn people into his mummy minions.

Harnessing the power of Anubis, the Pharaoh has the power to turn people into his mummy minions.