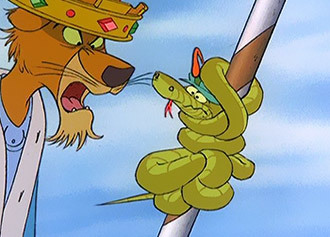 "Get out of that, if you can!"
Advertisement:

One way of beating something with tentacles, long stretchy limbs, or serpentine features is by tying it up with said features. For smaller creatures, those about the size of the protagonist, this often involves physical tying. Larger creatures will have to be wrapped up with more complex maneuvers, similar to what one would use to dispose of a Misguided Missile.

Sub-Trope of Bound and Gagged, and almost always involves Hoist by Their Own Petard. Compare and contrast Tentacle Rope. Not to be confused with Human Knot or Naughty Tentacles.