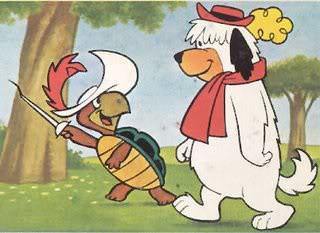 Touché Turtle and Dum Dum are a pair of Funny Animal swashbuckling Hanna-Barbera cartoon characters, respectively a turtle wearing a feathered musketeer-style hat and a sheepdog dressed in a scarf and smaller plumed hat. Together, they fight evildoers and save the day, though normally after weathering a fair number of daunting complications featuring many Amusing Injuries. The intrepid turtle's Catchphrase of "Touché away!" is routinely heard whenever he charges into battle.

Touché's vocal actor was Bill Thompson, using the same voice he employed for Droopy. His not-too-bright sidekick Dum Dum was voiced by Alan Reed, best known for playing Fred Flintstone. They appeared as the second segment on The Wally Gator Show.

Touché away! This series provides examples of: