Literature / Fantastic Beasts and Where to Find Them 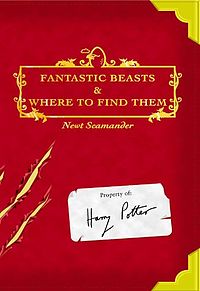 Fantastic Beasts and Where to Find Them is a book mentioned in Harry Potter and the Philosopher's Stone which was later Defictionalized as a real book written by J. K. Rowling... ahem... Newt Scamander, whose grandson married Luna Lovegood. The book was first published in 2001, between the releases of Goblet of Fire and Order of the Phoenix, with an Updated Re-release in 2017.

The book is, of course, a guide to the magical beasts which exist in the world of Harry Potter. It is supposedly a copy of the edition owned by Harry Potter, complete with lots of amusing graffiti written in it by Harry and Ron, a bit from Hermione, and one memorable case from Malfoy (with whom Ron apparently played Hangman).

A companion piece to Quidditch Through the Ages and followed by The Tales of Beedle the Bard.

A Harry Potter Spin-Off film series began in 2016 with the first film reusing the title of the book, following the adventures of Newt Scamander seventy years before Harry set foot in Hogwarts, with J.K. Rowling writing the screenplays.

Fantastic Beasts and Where to Find Them provides examples of the following tropes: