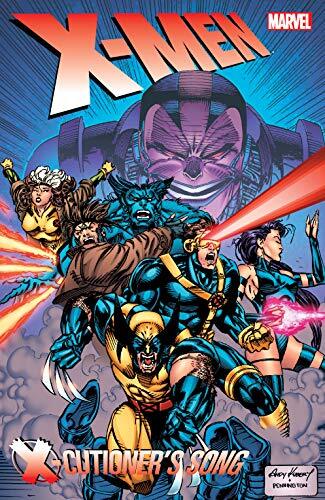 X-Cutioner's Song was a 1992 multi-part crossover event running through X-Men, X-Factor, X-Force and Uncanny X-Men, serving as a conclusion to the storyline between Cable and Stryfe.

Things weren't good with the teams — Cable had taken over the New Mutants and rechristened them into the para-militaristic X-Force, X-Factor was co-opted by the U.S. Government, Colossus had just lost his brother Mikhail to suicide and the love lives of many of the X-Men were in disarray — Psylocke was trying to break Cyclops and Jean Grey up, Gambit's estranged wife Belladonna returned into his life only to commit suicide and Wolverine was forced to kill his beloved Mariko after she was poisoned.

Then, suddenly, the X-Men are attacked by the new Four Horsemen of Apocalypse as Cyclops and Jean are kidnapped while Professor Xavier, attending a concert by Lila Cheney, is shot by... Cable?! Now, the X-Teams must find a way to save Xavier, rescue their friends and find out what's going on.

Tropes Associated with this storyline: