Film / The Man from Hong Kong 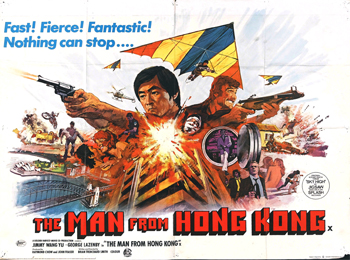 The Man from Hong Kong (also known as The Dragon Flies) is a 1975 joint production between the film industries of Australia and Hong Kong, directed by Brian Trenchard-Smith, and is pretty much what you'd expect from that description: a kung-fu movie set in Sydney.

The titular man is Inspector Fan Sing-Ling (Special Branch), played by Jimmy Wang Yu, sent to Sydney after a prominent hitman and runner from Hong Kong, Win Chan, is arrested at Ayers Rock following a drug deal gone bad. Further investigation reveals the man behind it all - a certain Jack Wilton (George Lazenby), undisputed crime lord of the entire city. The local police are initially unwilling to help Sing-Ling due to Jurisdiction Friction, leading him to go after Wilton himself, leading to plenty of kung fu fights and vehicle chases. It doesn't go as planned, but he recovers at a vet's daughter's house and launches one final, successful, assault on Jack Wilton's penthouse.

The film is notable for (as mentioned above) being an Australia-Hong Kong collaboration, featuring George Lazenby in a rare villainous role, and the Breakout Pop Hit, "Sky High", by Jigsaw, which plays during the opening and closing credits.