Recap / Star Trek: The Next Generation S4E19 "The Nth Degree" 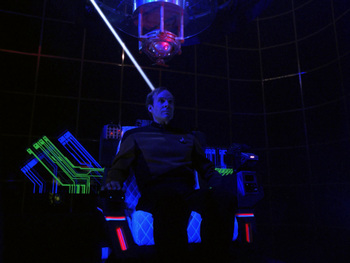 Lieutenant Barclay has taken up acting in his spare time. Even though he's pretty awful, Counselor Troi applauds him for his progress, as last time we saw him he would never have had the nerve to perform in front of an audience. But that isn't to say that he’s entirely moved beyond feeling awkward around other people; in particular, he doesn't appreciate his own successes as much as Troi and La Forge do. After everyone else leaves, he sits alone on the stage.

Anyway, the Enterprise's next mission is to investigate the Argus Array, a large unmanned radio telescope at the edge of Federation space, which inexplicably went silent two months ago. They discover a mysterious probe, which they conclude is the most likely culprit, and send La Forge and Barclay to get a closer look. Barclay thanks La Forge for choosing him for the assignment, and La Forge tells him that he's one of the ship’s top engineers, and it’s about time he got in on some of the interesting stuff. Just then, the probe emits a flash of light that knocks Barclay unconscious. When he comes to, he has Dr. Crusher check him out. She tells him that he seems to be OK but she’ll have to wait for some test results to know for sure. Rather abruptly, Barclay starts to make radical suggestions about how she could run the tests faster.

The probe begins approaching the Enterprise and building up some sort of energy field. They back away from it, but it matches their velocity, and their phasers do nothing to it. They can't fire photon torpedoes because the probe is too close. Barclay, acting on his own, somehow boosts shield capacity by 300% and tells Picard he can now fire photon torpedoes, which do the trick. With the probe out of the way, the crew can focus on repairing the array, which La Forge estimates will take two to three weeks. Barclay interrupts and says that he can do it in just two days by creating a new computer program to install into the array. Troi remarks to him that his confidence seems greatly improved and he agrees, though he can't explain what sparked it. It's enough for him to smoothly ask Troi on a date in the arboretum, and though she turns him down, citing professional ethics, she seems rather tempted. Even his acting has gotten better; Crusher is moved to tears by his performance in a rehearsal.

The next morning, though, it seems as if he's fallen back into his old habits—he misses a scheduled meeting, and La Forge tracks him to the holodeck. But instead of working his frustrations out against caricatures of his crewmates, he's kicking around some quantum physics theories with Albert Einstein. La Forge remarks that the ideas they were discussing were out of his league and should have been out of Barclay’s league as well. He's sure there’s something fishy going on, though Barclay is offended by the implication that being mediocre and awkward is his natural state. Nevertheless, Dr. Crusher confirms that his brain has dramatically changed since his encounter with the probe—enough to make him the smartest human being to ever exist.

The Argus Array's reactors go critical as they attempt to repair it, and Barclay finds the computers to be too slow, so he goes to the holodeck to build one of his own. With seconds remaining before a catastrophic overload that will destroy the Array (and probably the Enterprise with it), the reactors shut down, and when the bridge crew inquires how it happened, the computer responds in Barclay's voice. He has literally connected his brain to the ship’s computer systems. Picard orders him to break the connection immediately, but he and the computer are now inextricably linked. Any attempt to pull him out would kill him.

To make matters worse, Barclay soon decides to stop listening to Picard's orders and takes control of the Enterprise himself. He develops a way to move the ship at greater than warp speed and prepares to jump. Troi goes to the holodeck to reason with him, but he doesn't listen. He also blocks Geordi’s attempt to set up a computer bypass through Engineering. Running out of options, Picard orders Worf to disconnect Barclay by force, but Barclay’s set up a force field to protect himself. The ship jumps through Barclay's whatever-it-is, coming out 30,000 light-years away from where they started. When they get there, the computer is suddenly under their control again, and a giant floating head appears on the bridge. Barclay shows up, disconnected from the computer, to explain that the alien race that made the probe had designed it to bring other races to these coordinates to observe and learn from them. It was supposed to work with computers, but it accidentally reprogrammed Barclay’s brain instead.

The Enterprise spends ten days conversing with the aliens, then heads back to Federation space. The aliens safely disconnected Barclay from the computer, and he's more or less back to normal again. Troi and Geordi comfort him over his loss of confidence and super-intelligence. They tell him that this experience might help him grow, and either way he's still an important part of the crew. Troi even agrees to go on that walk in the arboretum with him. As they leave Ten Forward, Barclay stops to suggest a move to a woman playing chess, announcing checkmate in nine moves.

Troi: I didn’t know you played chess.
Barclay: I don’t!