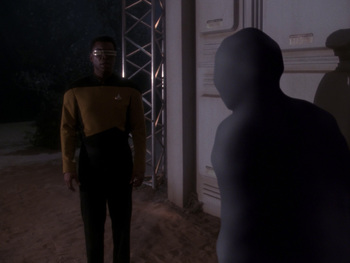 On Tarchannen III, Lt. Cmdr. Susanna Leijten leads an away mission with Starfleet officers Hickman, Brevelle, Mendez, and a young Lt. La Geordi Laforge, still in a red uniform. They're investigating the disappearance of 49 colonists. Since this event, two of these officers have themselves disappeared mysteriously, and the third, Hickman, has stolen a shuttlecraft to return to the planet. On the Enterprise, Leijten briefs the bridge crew as the ship journeys to intercept Hickman. On the way there, she and Geordi reminisce about their time serving together, revealing that Leijten has been a big sister to Geordi.

The crew arrives just in time to see Hickman barreling his stolen shuttlecraft recklessly into the planet. Picard tries to talk him down, but the fugitive burns himself up in the atmosphere. Riker leads an away team to the planet to get some answers, with Leijten and Geordi in tow. The officers locate another stolen shuttlecraft and the tattered remains of a Starfleet uniform, evidence that Mendez had arrived here. While exploring the area, Geordi discovers Leijten having some sort of psychotic break and has her beamed back to Sick Bay.

Crusher notes that Leijten is having a histamine reaction to biological material from the planet and attempts to treat her. Leijten remains jittery and becomes increasingly fixated on returning to the planet. She begins to have another psychotic break, causing her to collapse into Geordi's arms, where he notices that she's physically transforming into an alien form. In Sick Bay, Crusher confirms that Leijten is transforming into an alien, one whose skin is highly sensitive to light and reacts to it with radiance of its own. Crusher tells La Forge that his own transformation is likely imminent.

La Forge decides to spend what time he has left as a human studying the mystery on the planet. He simulates the away mission's recording in the holodeck and discovers that a human-shaped shadow was standing right next to them the whole time. Meanwhile, Crusher has located an alien parasite in Leijten's body, the source of the transformation. She removes it, and Leijten begins to recover. Leijten says that the parasite is how the aliens procreate. They try to locate Geordi to have his own parasite removed, but Geordi is nowhere to be found.

The Chief Engineer's transformation has already completed. The Geordi-Alien turns invisible and beams itself down to the planet. An away team is sent to recover him. Using UV lights brought by Data, they manage to locate the invisible aliens. Leijten leverages her relationship with Geordi to contact the small remnant of himself still lingering in the alien body. He embraces Leijten and allows himself to be returned to the ship.

After getting his parasite removed, the newly restored Geordi states that within a few minutes, his mind would have been completely lost. The former Starfleet officers and colonists are irrevocably transformed, so Picard has warning beacons placed around the planet and leaves them in peace. Geordi thanks Leijten for all of her big sisterly help.