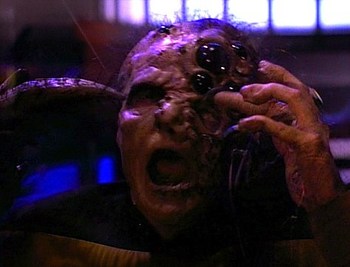 "Are we not men??"
It's a normal day in sickbay, and Doctor Crusher is examining Barclay's latest bout of hypochondria. It turns out that he really is sick this time, though far from any life-threatening condition, it's an ordinary case of Urodealean flu, which his body is able to fight naturally after Crusher gives him an injection to activate a required gene that happens to be dormant. Data also brings in Spot for a pregnancy checkup, and Nurse Ogawa decides to drop the news that she is also expecting. Looks like the day is off to a good start.
Advertisement:

On the bridge, Worf is field testing some newly-upgraded torpedoes in an asteroid field. When one of them veers off course (the result of some "improvements" made to the guidance system by Worf himself), a bored Picard decides to take a shuttle out himself to retrieve it. Data joins as well, after leaving Spot in the care of Barclay.

Not long after they leave, the Enterprise crew starts exhibiting unusual behavior. Most obvious is Worf, who starts becoming almost feral in his behavior. Troi starts feeling excessively cold, Barclay is running around like he's on meth, and Riker is finding it difficult to concentrate.

The situation comes to a head when Worf enters Troi's quarters while she is bathing (in her uniform, no less) and bites her in a fit of primal lust. By the time the two of them are taken to Sickbay, Worf is no longer responding to questions. Crusher notices that he has developed some kind of toxin sac on his neck, and when she tries to examine it, Worf sprays acid directly in her face. The results are unpleasant to say the least.

With Crusher incapacitated, much of the crew sick, and a crazed, poisonous Worf on the loose, the remaining senior staff hold a meeting to discuss how to handle the situation. Unfortunately, most of them are too far gone by now, particularly Riker, whose cognitive problems have rendered him unable to command.

When Picard and Data return from their mission some days later, they find the Enterprise adrift and unresponsive to hails. Inside they find what appears to be a mostly empty ship, but internal sensors confirm that the the crew is present, and they have all started to de-evolve into various primitive species. Troi resembles an amphibian species, Riker has become proto-human, and Barclay arachnid. An airborne virus is causing random introns, latent DNA from previous evolutionary forms, to activate, causing the mutations.

Non-human species are also affected, including Spot. Picard notices that Spot has given birth and her kittens are not affected, leading Data to conclude that Spot's prenatal antibodies made them immune. To that end, they find Nurse Ogawa, since she is also pregnant, to acquire humanoid antibodies that will be effective for the crew.

There is one other problem: Worf's transformation has taken the form of a highly aggressive proto-Klingon predator. As he is trying to break into sickbay, Picard realizes that Worf is being driven towards Troi by his mating instincts. To give Data time to work on the antivirus, Picard lures Worf away using a hypospray containing Troi's pheromones.

After a chase through the corridors, Picard is able to improvise an electrical trap that incapacitates Worf long enough for Data's cure to take effect. Once the crew has returned to normal, Crusher finds that the virus came about from the injection she gave to Barclay, which had the unintended side-effect of activating more than just the one gene it was meant to due to a unique characteristic of his... something or whatever, you get the picture.