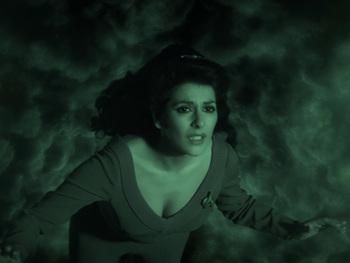 "Eyes in the dark. One moon circles!"
Advertisement:

The Enterprise is searching a binary stay system for a missing ship, the Brattain. They discover her floating in space, with all of her crew murdered except one catatonic Betazoid. Crusher begins examining the bodies and quickly realizes that the crew went berserk and killed each other. Logs from the ship reveal that the crew descended into madness. Troi tries to contact the Betazoid telepathically to find out more, but his thoughts are limited to a few fragments of words that make no sense. Further, the crew start to hear eerie noises, leading to concerns that the madness has started to infect them as well. Picard orders the ship to get the hell out of there, but the engines won't work. They're adrift, just like the Brattain was.

The ship is stuck in a "Tyken's Rift," a space anomaly that can only be escaped with an intense explosion. Over the next ten days, the trapped crew become increasingly frazzled. Crusher and Troi report that crewmen are experiencing heightened tempers and menacing hallucinations. Riker admits that he has the recurring impression that there's someone lurking in his quarters. Troi, meanwhile, is having nightmares of floating in a green vortex toward two bright lights while a voice intones, "Eyes in the dark. One moon circles." Even Picard starts to crack. Only Data seems immune.

Crusher figures out that the crew's problems stem from not getting REM sleep. Something is preventing their brainwaves from reaching the necessary frequency to dream. Only Troi, who achieves REM sleep at a different frequency due to her Betazoid ancestry, can still dream. If they don't get REM sleep, they'll eventually die. Data takes charge of a plan to push them out of the rift using a pulse from the ship's main deflector dish, but it fizzles to no effect. Things seem dire as the crew is pushed to the brink of terminal madness. Guinan only narrowly puts down a paranoia-fueled riot in Ten-Forward.

Troi keeps trying to contact the Betazoid from the Brattain. She hears him repeat the words, "Eyes in the dark. One moon circles," from her dreams and realizes that it's a message. Someone is using the frequency of dreams to send a distress beacon from the other side of the rift. That's why no one else can dream on that frequency. Troi works with Data to figure out what the message means: The "two eyes in the dark" are the binary suns, and the "one moon circling" is a single electron orbiting the nucleus of a hydrogen atom. The aliens are requesting hydrogen to blow themselves out of the rift!

Data releases a stream of hydrogen into the rift. At the same time, Crusher helps Troi instantly achieve REM sleep to tell the aliens through her dream that they should detonate the hydrogen "now!" She's only got two minutes before the ship's resources are completely depleted. Data counts down from two minutes to zero, but nothing happens. The plan seems to have failed. But then... big explosion! Both the Enterprise and another alien ship are rocketed out of the rift. The day is saved. As acting captain, Data orders the whole crew to get a good night's sleep.