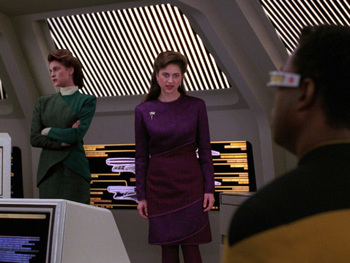 The woman of Geordi's dreams... and the actual Dr. Brahms.
Advertisement:

Geordi is delighted to welcome starship engine designer Dr. Leah Brahms aboard the Enterprise. He's a big fan, having "collaborated" with a holographic recreation of her back in "Booby Trap." In spite of Guinan's warnings about being fixated on a fantasy, Geordi is dismayed to find the real Brahms to be curt, cold and highly disapproving of his modifications to her engine designs. Still, Geordi soldiers on, trying to establish friendly relations with the engineer while occasionally creeping her out by his mysteriously comprehensive knowledge about her.

Meanwhile, the Enterprise funs across a starship-sized creature that seems to dwell in space as its natural habitat. Picard is overjoyed to discover a new, exotic lifeform and orders the ship closer to examine it. The space slug is not so enthused to see the Enterprise, however, and attacks. With no other option, Picard orders the ship to fire phasers at their lowest setting, which unfortunately kills the creature. Picard is mortified that his mission of discover has led to a death.

Brahms finally discovers the records of Geordi's interactions with her holographic alter-ego. Geordi bursts into the holodeck to explain, but it's too late. The horrified Brahms chews him out for using her image as some sort of fantasy girlfriend. Geordi reacts with equal indignation, declaring that his behavior has been entirely justified and that he has only ever tried to be friendly.

While that mess is going on, the bridge has detected that the dead space slug was pregnant, and the offspring is trying to be born. The crew use the ship's phasers to perform the galaxy's larges-scale caesarian-section. However, the newly born slug immediately imprints on the Enterprise and begins feeding on its energy like it would its mother. They find a nearby asteroid field with minerals that would likely sustain the creature, so they begin shepherding the creature there.

At the asteroid field, however, the creature refuses to detach itself. Worse, it starts summoning other adults of its kind. If the crew can't figure out a way to dislodge the baby slug, they'll be put in a very sticky situation. Geordi and Brahms must put aside their differences and concoct a plan to alter the frequency of the ship's energy, souring the baby slug's "milk." The ploy works. The slug joins its kind, and the ship is free to leave in peace.

After all the hubbub, Geordi and Brahms reconcile. Brahms apologizes for treating Geordi so coldly from the very beginning, while Geordi states that he's glad that he's gotten to know the real Brahms.

Tropes featured in "Galaxy's Child" include: