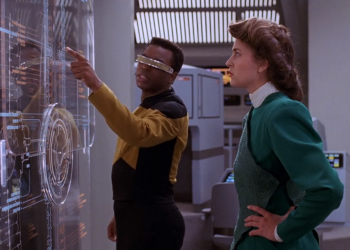 Geordi works the problem with his new holographic girlfriend
Advertisement:

Geordi La Forge is on a holodeck date with Christy Henshaw. He plies her with tropical cocktails and a "gypsy violin," but Henshaw tells him that she just doesn't feel the same way about him.

The Enterprise is investigating an asteroid field created by the former planet Orelious IX, the site of an ancient battle that wiped out two ancient spacefaring races: the Promellians and the Menthars. A surviving Promellian battle cruiser is discovered in the field. This discovery excites Captain Picard, who compares it to the ships in bottles that he built when he was a child. To his chagrin, no one seems to get his reference until O'Brien pipes up that he used to build ships in bottles too. As Picard, Data, and Worf beam over to the cruiser, O'Brien notes a slight power drop that seems to correct itself.

Geordi commiserates with Guinan about his bad luck with women and decides that he might have come on a bit strong. Guinan also reveals that she has a thing for bald men. Wait, what?

The away team picks through the ancient Promellian ship and discovers the remains of its crew still at their posts. Picard marvels at the elegant and advanced design of the ship, and Data finds the final recording from the ship's captain, who takes full responsibility for the fate of his ship. They return to the Enterprise, and Picard is quite pleased with the discovery. They prepare to leave... only to find that their power is being drained.

Even with the engines running at full warp, they're not moving. Geordi comments that everything appears to be operational, but as they're unable to move, he recommends slowing down to prevent burning out the engines. What's more, the Enterprise is suddenly bathed in high-energy radiation, which is stopped by the shields— but the power drain will knock the shields out in a few hours. The crew come to realize that they're caught in a Menthar booby trap, just like the Promellian ship was a thousand years earlier.

Needing to figure out a way to escape before their energy reserves run out, Geordi decides to go back to the beginning— to the logs of the designers of the Enterprise's engines. He has the computer play back the engineering logs of one of the designers, Dr. Leah Brahms, but Geordi soon finds out that it's not enough. For a more interactive experience to work on the problem, he heads to the holodeck. There, he recreates the design room at the Utopia Planitia Fleet Yards on Mars, where final construction of the Enterprise was completed. He continues to work with the voice of Dr. Brahms guiding him, but when he asks the voice to show him something in particular, the computer creates a virtual Leah to point it out.

At first, the holographic Brahms merely continues to recite the relevant logs in a monotone manner. This leads Geordi to have the computer search for her personality profile from the available records to create a personality for the avatar, to make her easier to interact with. The two begin arguing over their approaches to the problem, but gradually work things out and start to make progress, as Geordi finds himself growing attracted to "Leah." Geordi reports to Picard that he's getting close to a solution.

Meanwhile, Data and Riker have salvaged the remaining data cylinders from the cruiser and discover that the booby trap is a series of energy collectors embedded in many of the asteroids. Phaser energy would merely be absorbed, while the ship is too close to the collectors to safely use photon torpedoes, especially without full shields. Combined with an increase in ambient radiation in the field, the crew faces dying of exposure even before their air would run out. Nevertheless, Picard has Worf try the phasers. Unfortunately, this only accelerates the power drain and increase the radiation, forcing the ship to automatically shut down nonessential systems— including the holodeck, just as Geordi might be making a breakthrough.

Picard calls a briefing to consider their options, and Dr. Crusher states that they would have about 26 minutes once the shields failed before the crew would succumb to radiation poisoning. Geordi asks Picard to reinstate the holodeck, explaining that he's been using it to run simulations to try to find the solution. Picard gives him one hour to continue. At the end of the hour, Picard checks in, and is surprised to find Dr. Brahms. Geordi explains that by going back to the design phase, he can better understand the capabilities of the ship. Picard asks for a solution; Geordi suggests turning control over to the ship itself, as it can calculate course corrections at a rate superior to even Data.

Riker is understandably reluctant to give control to the computer, and his fears seem to be justified as Geordi's simulations keep ending with the ship being fatally irradiated before escaping. Despite Leah's insistence that the computer is the solution, Geordi realizes that instead of trying to overpower the collectors, a short burst of the impulse engines, followed by the minimal use of thrusters, would be enough to clear the field. Picard opts to take the conn for this operation, and with Data's help, he's able to use the gravity field of a large asteroid to slingshot the Enterprise clear of the field. Once clear, Picard orders the destruction of the Promellian derelict and the surrounding collectors, to prevent others from falling into the trap.

Geordi says his goodbyes to Leah, noting that as much as technology has improved their lives, there are times where it just needs to be turned off. Leah reminds him that she will be with him as long as he's on the ship. They kiss, and Geordi ends the program— which is sure not to come back to bite him in the ass later... right?