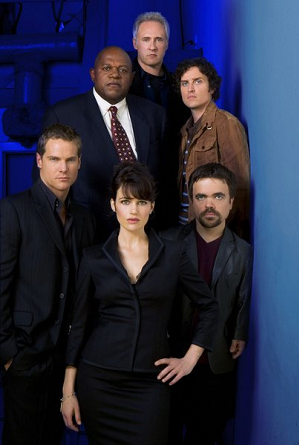 Molly Caffrey: My name is Molly Caffrey, and I work for the Federal Government. I deal in worst-case scenarios, the unthinkable. On September 16th, 2005, the unthinkable happened. An extraterrestrial object appeared off the bow of a naval freighter. The entire crew was exposed to a high frequency signal. Some died instantly. Others began to change. They are now stronger, more resilient. They dream of alien landscapes. And they are driven by the impulse to infect others. Several of the crewmen are now loose in the United States. They will strike anytime, anyplace, anyone. Their goal: to turn us into them. But I have a plan to stop them. That plan is called "Threshold".
Advertisement:

A short-lived Science Fiction show about a government project dealing with an alien threat to Earth - specifically, that of humans who have been exposed to an alien signal, gained superhuman strength as a result, and are now trying to infect others. The series ran for nine episodes in the fall of 2005 on CBS, before being cancelled after a timeslot change backfired. The remaining four episodes were aired in Britain, and eventually released on DVD.

The plot dealt with the government activating a contingency plan called "Threshold" to deal with a first contact scenario, the central element of which was the creation of a "red team" to run things. In addition to their efforts to contain the outbreak, the show also explored the impact the Threshold protocols had on the team.