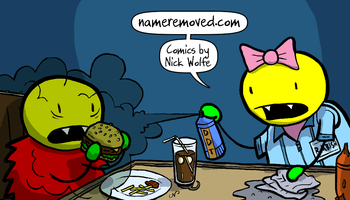 is an inactive webcomic by Nick Wolfe. It follows a group of creatures living in the city of Desperonto; fulfilling various roles, usually with Black Comedy involved; and being in unexplained and often unresolved scenarios.

The comic started in 2005 as true gag-a-day, but for most of its life was dominated by the "Variations" storyline. Wolfe would receive a prompt from a fan and make three separate comics based off of it. For example: Muffins

The main characters (some information derived from character page

The comic abruptly went on hiatus in 2012 and is still on hiatus to this day. A new storyline, "Whatever Happened to Name Removed?" was just beginning.