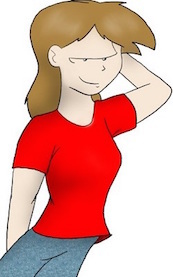 Mulberry fears no authority.
"Not everyone in a regal situation is an airheaded whiny stuck-up bimbo. No, some of us are intelligent. Some of us pose an actual THREAT to you. Get me?"
— Mulberry Sharona
Advertisement:

in 2004. The title character, who has also become Platypus Comix's mascot, had previously appeared in the final strips of another comic, Marin Meadow. Mulberry features Mulberry Sharona, a 16-year old heiress from Seven Springs, California, who has managed to avoid becoming an Upper-Class Twit thanks to Parental Abandonment. Accompanied by her friends Jack, The One Guy, and Taffeta "Taffy" Sparks, the Dumb Blonde housekeeper, this Non-Idle Rich girl makes adventures out of any scheme she comes up with.

Mulberry made a leap to the printed page in 2012, when Peter Paltridge began including new comics of hers in his periodical, BANG! Magazine.

Not to be confused with the web game Millsberry.