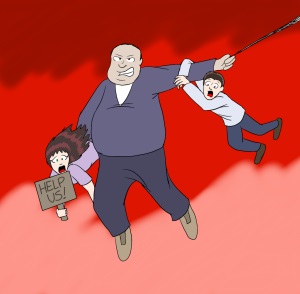 Your Friendly Neighborhood Joe Quesadilla.
"I'll never let anything come between us, MJ. Not supervillains, not dictators, not mad scientists, or monsters, or hypnotists, or aliens, or dimensional vortexes...not even comics editors."
— Peter Parker
Advertisement:

takes place while the characters from the website's flagship comics have gone on strike. The Head Executive tries to tide readers over with a Spider-Man comic, hoping he could get away with featuring characters he doesn't own when the characters he does own won't cooperate. The resulting story became Platypus Comix's Take That! against Marvel Comics' reviled One More Day comic, which had concluded two weeks earlier. In a 48-page, two-month-long, Roger Rabbit-ish storyline, Spidey and Mary Jane Watson fight to save their marriage from being wiped out by their own editor, Joe Quesadilla — a vicious Quesada caricature.