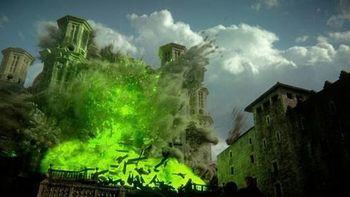 In King's Landing, Cersei, Tommen, Margaery and the High Sparrow prepare for the trial. Loras is summoned, and people fill up the central chamber in the Great Sept of Baelor. Grand Maester Pycelle is summoned away from the trial by one of Qyburn's "little birds," missing Ser Loras's confession. Instead of going to trial, Loras admits his guilt, renounces his titles and inheritance and joins the Faith Militant. But no one from the Red Keep actually comes to the sept: not Cersei, sipping wine in her black dress; not Tommen, detained in his room by the Mountain; and not Grand Maester Pycelle, who is murdered by an entire flock of little birds wielding knives.
Advertisement:

As Cersei continues to not arrive at the sept, Margaery grows suspicious of her absence, certain the queen mother is planning something, and urges the High Sparrow to dissolve the proceedings. Instead, the High Sparrow sends Lancel to escort Cersei to the sept. Unfortunately, Lancel is distracted by the sight of another one of those little birds. The boy leads Lancel to the darkness under the Great Sept and then stabs him in the back, leaving Lancel to look in wonder at what's surrounding him: thousands of barrels with green glowing liquid leaking out of them. Remember how Tyrion mentioned, last episode, the wildfire caches that Jaime says Mad King Aerys buried all over the city? Here's one of them. And, even better, there are candles in a Vapor Trail of wildfire, slowly burning down. Lancel, deprived of his legs, struggles towards it. He is working up some spittle (he can't even risk blowing them out) when they burn down. The Great Sept of Baelor explodes in a blaze of green fire, and Cersei watches in satisfaction as everyone in King's Landing who has ever vexed her—the High Sparrow, Ser Kevan Lannister, Lord Mace Tyrell, Queen Margaery Tyrell, Ser Loras Tyrell, Lancel Lannister—is incinerated. She has full and complete control over King's Landing, and with it the Iron Throne. She even has Septa Unella chained up in a basement and Cersei gives her a bit of Laser-Guided Karma (waterboarding her with wine, demanding she confess, intoning "Shame, shame") before turning her over to the tender care of Ser Gregor Clegane.

There is only one unexpected casualty: Tommen, seeing the green blaze and the destruction, walks away from the window, taking off his crown. And then walks back to it. And then walks through it. Cersei is shown his body by Qyburn. She orders his body cremated, and his ashes buried where the sept was so he can be with his family who are (...were) buried there.

At the Twins, the Freys and Lannisters celebrate their victory over the Tullys at Riverrun. A few serving women make eyes at Jaime, but the Kingslayer steers them in Bronn's direction. Walder Frey congratulates Jaime on their victory, saying they're the same now, having both killed kings. Jaime replies acidly that if the Lannisters have to keep bailing out the Freys, he's of no use to them.

At Oldtown, Sam and Gilly finally reach their destination. They gaze upon the Hightower with awe upon their first sight of the city. At the Citadel, The Maester whom they meet is unhappy at Sam's "irregular" arrival, as they had not been notified of Maester Aemon's death. Sam is led into their library, filled with hundreds of books. Sam is awed by and delighted with it.

At Winterfell, Jon reminisces about his past times there to Melisandre before Ser Davos enters. Ser Davos furiously confronts Melisandre with Shireen's toy stag. He demands that she confess what was done with her. She admits Shireen was burned at the stake as a sacrifice. Davos, naturally, is enraged and denounces the Lord of Light when she says it was his will, accusing Melisandre of leading Stannis on about being the Lord's Chosen. Melisandre protests she didn't lie, she was wrong...which Davos counters by asking her how many died because of that mistake? He requests permission from Jon to execute her for the murder. Melisandre, however, notes that she can help them win the war against the Night King and his army. Jon says she must ride south but if she returns North, she'll be hanged for murder. Davos adds to it the promise that he would do it himself if she does. Jon watches as she rides away into the distance through the snow. Sansa apologizes for not telling him of Petyr Baelish and the Knights of the Vale. They must trust each other, he says, and she agrees.

In Dorne, Lady Olenna meets with Ellaria Sand and the Sand Snakes to ally with them after Cersei's murder of her family. Olenna doesn't bother to hide her contempt for them and makes it plain that with her family's future in ashes, it's not survival she wants. Ellaria promises her revenge and justice. And when Lady Olenna asks how they plan to deliver this, it's Varys who provides the answer: Fire and Blood.

In Meereen, Daario tells Daenerys her fleet is almost ready to sail, but wonders how the Dothraki will cope with the sea. Daenerys tells him he will stay in Meereen to keep the peace while she conquers Westeros. She reminds Daario that ruling Westeros will require making alliances, and that the best way to do that is by marrying. He, as her lover, would not be welcome, and will be left to keep the peace while the citizens elect their own leaders in the Bay of Dragons, as they can hardly call it Slaver's Bay after she freed all the slaves and slew the treacherous Masters with her children. Daario proclaims his love for her, imploring that she bring him along, even if it must be as a "mistress". Daenerys gently refuses him. The two exchange farewells. Afterward, Tyrion wonders how Daario took it, and says she did what was necessary. He asks if she's frightened of their sailing to conquer Westeros, and says it's good when Daenerys indicates yes. Daenerys tells him that what frightens her is she felt nothing in leaving Daario. Tyrion tells her that, after years of cynicism that rose from seeing what befell those who put their faith in something, he now believes in her. Daenerys names him as her Hand, and Tyrion kneels before her, overcome with emotion.

Back at The Twins, Lord Walder sits down to eat, attended by one of the serving women whom Bronn and Jaime noticed before. She places a slice of meat pie before him. Lord Walder doesn't recognize her, but still expects her to know where his sons are. She explains that Lame Lothar and Black Walder are here, in the pie. As Lord Walder peels off the crust to reveal a finger, the serving woman peels off her face. It's Arya, and she's pleased to announce that the last thing Lord Walder will see before he dies is a Stark smiling down at him. Lord Walder dies of a slit throat, in the same room and manner that Lady Catelyn Stark did three seasons ago.

In the godswood of Winterfell, Petyr approaches Sansa, apologizing if he's interrupted her prayers. She announces that she's done with praying, as it does her no good. Petyr says everything he has done was to gain the Iron Throne, with Sansa at his side. However, Sansa withdraws from him. He says she should rally support from the Northern lords, as they will follow her, and not Jon.

Beyond the Wall, Benjen leaves Bran and Meera in a godswood, which is protected with ancient spells that prevent wights from entering it. Bran goes into another vision, seeing his father in the past at the Tower of Joy. This time, however, he follows him in. Ned goes into a room where Lyanna is waiting, bleeding into the covers of her bed. Despite her big brother's promises, she knows she's dying, but there is one last thing she must do... As Bran watches, she whispers something to Ned, saying he has to protect "him" and "promise me, Ned". Then the sound of a baby crying is heard and one of the women attending Lyanna hands a dark-haired infant with brown eyes — Lyanna's son — to a stunned Ned, who takes his infant nephew in his arms. Bran gasps as he realises the child's identity and the sacrifice his father made out of love for his younger sister.

In the great hall of Winterfell, that same infant — today called Jon Snow — presides over a gathering of the remaining strength of the North. Many of them are unhappy at the idea of allying with the Wildlings. Jon replies that they have proven themselves true friends on the battlefield, and the real war is still coming. Lady Mormont rises to rebuke the lords who refused the call to fight with Jon, despite the atrocities of the Boltons. She calls for the lords all to support Jon as the king in the North, regardless of him being a bastard. Lord Manderly supports this, and pledges fealty to him. The others swiftly follow, Lord Glover apologizing that he did not help them. They hail him as the King in the North together with drawn swords, and soon the entire hall has knelt in fealty beside them. Sansa smiles at her brother but her smile fades when she meets Petyr's eyes, with Petyr looking on from the side of the hall.

Bronn and Jaime return to King's Landing to find smoke still rising where the Great Sept stood. In the throne room of the Red Keep, Cersei is declared queen by Qyburn, himself adorned with the Hand of the King's badge, and then crowned. She and Jaime trade ambiguous looks.

In the Bay of Dragons, Daenerys's fleet departs. She has assembled one heck of a Multinational Team: the Dothraki, the Ironborn, the Unsullied at her back, her dragons overhead, and Tyrion and Varys at her side, the latter having brought fleets with Martell and Tyrell sigils on their sails. Theon, having come a long way to reclaiming his true identity, looks up with pride from the deck of an Ironborn ship at a flag bearing his family sigil. As a whole, the armada set their courses west, their destination the Seven Kingdoms.

In other news, during the scene in Winterfell Sansa tells Jon that a white raven has arrived from the Citadel. Winter has come.